NON-STEM MOM GETS A PERFECT SCORE

ON THE SCIENCE ACT

The Neurotic Parent archivists have uncovered found this post buried in ‘DRAFTS.’ It’s about how a writer/soccer mom who hadn’t taken a science course in almost four decades scored a 36 on the science section of the ACT (Well, it was a practice test, but still a noteworthy accomplishment.) The post was originally written in 2012, when younger son GC (Good Conversationalist) was prepping for the ACT. It was posted briefly at the time but taken down because it seemed to be poor judgment to write about the ACT when GC’s whole future depended upon his score. What if the ACT peeps saw the post and decided to actually include some science on the exam, rather than user-friendly charts?

1. Get caught in traffic on the way back from a distant soccer tournament. Spend 3+ hours listening to stressed-out teenagers discuss how they’ve heard the ACT science section is ‘impossible,’ even though they’ve taken AP Physics and Honors Organic Chemistry.

2. Later that night find an online ACT practice test on the ACT site. Skip the very appealing 75-question English section and go straight to Science. Feel relieved when you see a bunch of simple charts, rather than complex questions about quantum theory. Forge ahead answering questions about the chart below, like ‘What is the surface elevation at the site that is closest to Grand Forks?” (I kid you not). 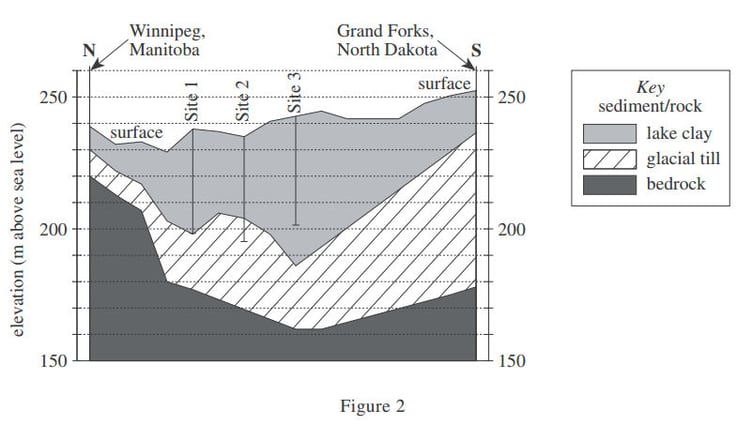 3. Gain confidence as you realize that although you don’t have a clue about what glacial till is, reading charts about it is no biggie. Other charts had to do with sleep deprivation studies – interesting, but no lingering to read because there’s less than a minute to come up with each answer… (And then there was the chart posted above – Hmmm…..is a rock concert louder than rustling leaves?)

4.Finish the rest of the test. Occasionally, you’ll have to read a whole paragraph that has no visual image. But when that happens, be sure to read the questions first so you can skim the boring stuff for the answer. In fact, skimming is the skill you want to hone for this section – not memorizing the periodic table.

5. When in doubt, guess C…duh.No penalty for incorrect guesses.

6. Score your exam. Stare in disbelief when you see that all 40 questions are correct. Contemplate entering a PhD program at MIT, then decide to instead to become the brand ambassador for the misunderstood ACT Science Section. Call those soccer players and tell them it’s all about the charts and graphs, baby. If you can find your flight on a departure board at LAX, you’re good to go.